A Smart City strategy for my municipality: What are the advantages and where are we in Wallonia?

In Wallonia, more than half of the cities and municipalities confirm that they have taken steps towards sustainable and smart transition in their territory (Walloon Barometer 2021 - Smart City & Smart Region). But where do they stand when it comes to formalising these initiatives in a plan? Indeed, many of them certainly have a clear and structured idea of the dynamics underway, but is this strategy clearly written somewhere or does it remain rather informal? What are the advantages of defining a Smart City strategy and what are the resources available to municipalities wishing to establish their own strategy?

In this article, we take stock through a series of questions and answers with Pauline Naisse, communications officer at the Institute. This interview is mainly based on the results of the latest Walloon Smart Cities and Smart Region Barometer.

We can't say that yet, but encouraging figures show that the practice is starting to spread within municipalities. Here is a particularly telling one:

+10%. This is the proportion of Walloon municipalities that, between our 2020 and 2021 surveys, revealed to us that they had formalised a strategy to guide their Smart City thinking. As explained in the article dedicated to the Walloon Barometer 2021, this is a very encouraging progress which shows that our municipalities have the will to structure their approaches. 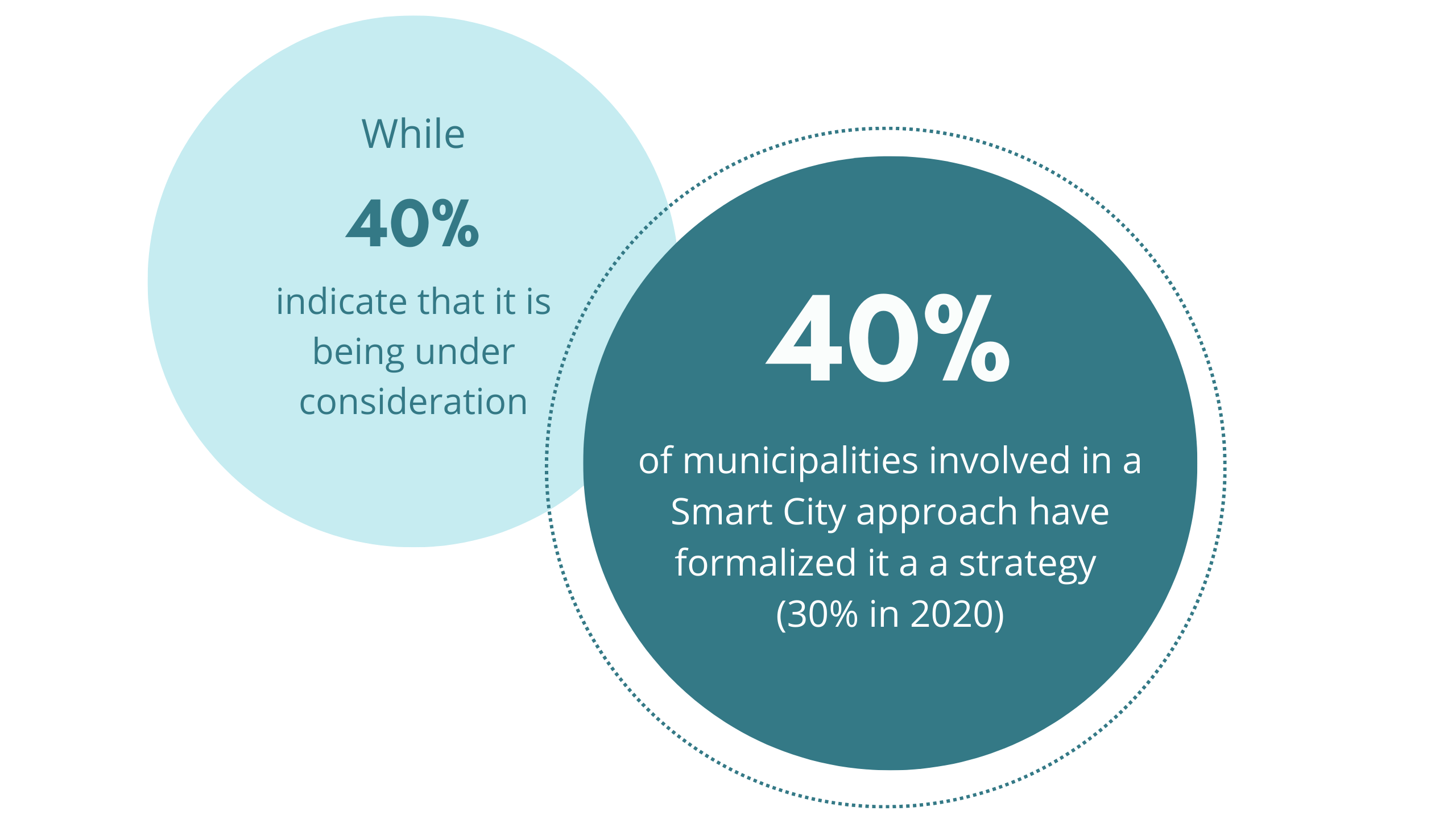 In 2021, 40% of Walloon municipalities involved in a Smart City approach
said they had formalised a strategy to guide their reflections in the field
(figures from the infographic).

If municipalities do not systematically formalise their approach, does this mean that they are launching Smart City projects in their territory without a strategy beforehand?

Indeed, this still represents the majority of cases in Wallonia at the moment. Proportionally, 6 out of 10 municipalities have undertaken Smart City initiatives without any clear strategy. However, the survey presents a rather promising observation, since the majority of these municipalities state that, although they do not yet have a formalised strategy, they are currently considering this issue. Only 20% of them have not defined or do not plan to formalise their approach in a strategy.

Table from the report of the Walloon Barometer 2021 Smart Cities & Smart Region:
Formalisation of the strategy in Walloon municipalities - detailed results

Can we explain why some municipalities do not (or not yet) have a specific strategy?

Yes, several reasons are given by the Walloon municipalities. The most frequent reason is that the Smart City approach is not sufficiently mature to be formalised (54%).

However, this reason is only part of the answer, since some municipalities told us that they were confronted with a lack of expertise or resources needed to develop their strategy (reasons mentioned by 38% of Walloon municipalities that do not have a strategy).

This does not mean that our municipalities are not willing, but rather that they need more time and/or resources to do so.

How can a Smart City strategy be a plus for municipalities?

Of course, it is not impossible to carry out a Smart City approach without having it clearly formalised in a document, dedicated or not. But whatever the size or configuration of the municipality - or of any territory in general - defining a strategy for sustainable and smart transition has many advantages.

A strategy is a tool that is at the same time mobilising, motivating and structuring for all the actors involved in the process, which will enable, in particular, to clarify where the municipality wishes to go: it helps to define the direction that the municipality wants to take in the long term, as well as the measures to be undertaken in the short, medium and long term to achieve this. The strategy will thus serve as a compass to keep you on the right track over time.

To carry out a detailed analysis of your municipality, its specificities, its strengths and weaknesses, but also the opportunities and threats it faces, in order to be able to implement, thereafter, projects that are adapted, feasible and therefore sustainable. And this requires not only an analysis of a whole series of prerequisites for the implementation of a Smart City approach, but also a diagnosis of the current functioning of your municipality and the context in which it is situated.

Establish a consensus by putting everyone (i.e. all the actors concerned in your territory) around the table, thus making it possible to establish a common vision and objectives that are accepted by all. Your Smart City strategy designed in this way will facilitate acceptance of the actions to be taken and will also motivate your staff in the long term by giving them a roadmap to follow.

Define priorities that will guide your choices when defining the projects and actions to be implemented, by identifying the key areas/sectors to be supported, the "critical points" that you need to improve, and this according to the needs identified within the municipality.

Communicate clearly and transparently about your Smart City approach to the various stakeholders.

Also, to measure the performance of the actions implemented on the territory, thanks to the definition of a whole series of indicators that will make it possible to measure their success, but also to make adjustments if necessary.

In concrete terms, does this mean that a municipality must necessarily have drawn up a specific Smart City strategy?

Not necessarily. In reality, in Wallonia, we can see that many municipalities formalise their Smart City approaches through a broader programme, in most cases the TSP (Transversal Strategic Programme) (81%). In some municipalities, it is therefore not a question of drafting an additional document, but of integrating Smart City reflection into existing plans.

Finally, what means are at disposal for municipalities to help them define or challenge their Smart City strategy?

To support the development of sustainable and smart transition initiatives in Wallonia, and in particular cities and municipalities wishing to define their strategy in this area, the Smart City Institute is developing and providing a number of free tools as well as a training programme for territorial actors:

Our collection of Practical Guides, which can be downloaded for free, among which the first basic volume will provide you with the keys to define your Smart City strategy in 15 key steps.

Didactic capsules, available online, which will allow you to (re)discover the phases and key steps essential to the implementation of a successful Smart City strategy, but also to (re)clarify the concept of Smart City.

A framework to fill in, the SPMM (for Smart Project Management Model), to support territorial actors step by step in the implementation, management and evaluation of their Smart City projects (free download).

And of course, training programmes, including a 2-day workshop specifically dedicated to the Smart City Strategy, organised in September 2022, as well as an executive training which will be proposed in 2023.

> More about the workshop

Is your municipality ready to embark on the Smart City adventure and needs to acquire the necessary skills to do so? Perhaps you are one of the 40% of municipalities involved in a Smart City approach that are considering defining a strategy? Or you want to share your experience or challenge your existing strategy? Then join us on 15 and 16 September at our workshop!
> More information

Sources and references - To go further:

Discover all our blog articles