Starting a rooftop greenhouse project : the good questions to ask

Feedback of the GROOF pilot projects

A Smart City is also a city/territory that thinks about sustainable and intelligent production and marketing of the food we consume. To meet this objective, rooftop greenhouses have been emerging in the urban landscape for several years. Although this is an innovative process, it is still complex to set up. In order to ask the right questions when developing this type of project, Nicolas Ancion, researcher at the Smart City Institute and the Centre de Recherches en Agriculture Urbaine (CRAU) of the University of Liège, presents us with feedback from four European pilot projects (GROOF) whose ambition is to simplify, in the future, the approaches of future project leaders by confronting, as of today, the challenges they face.

Picture of the "Serr'ure" rooftop greenhouse project at the University of Liège (Gembloux, Batiment TERRA).

What is urban agriculture ?

The first traces of urban agriculture (UA) emerged as soon as the first cities appeared. The industrial revolution, the rural exodus, and wars are all factors that have influenced the forms of agriculture in cities. Today, urban agriculture is still present and developing everywhere, especially in unused spaces, such as rooftops.
"Urban agriculture is the practice of farming in urban and peri-urban areas. It exists in many forms: community gardens, rooftop gardens, indoor urban farms, vertical agriculture and many others. It also concerns various forms of exploitation such as horticulture, livestock, aquaculture, agroforestry or urban beekeeping."* Among the benefits of such a practice, we could mention the contribution to air purification, the development and preservation of biodiversity, the promotion of local production and consumption or the creation of local jobs.
* Source : Definition proposed by the CRAU on its website
Although urban agriculture has existed for a very long time, it seems to be of increasing interest to local stakeholders. Indeed, it is at the crossroads of many issues that are at the basis of current debates: climate change, population growth in urban areas, preservation of biodiversity, desire to consume better and more locally, etc.

The activities developed in this field are quite diversified. Indeed, they concern both the implementation of urban vegetable gardens maintained by citizens and the development of greenhouses on roofs, which are more complex to implement.

For the purpose of this article, the latter are the ones that have caught our attention. Indeed, these innovative initiatives require asking the right questions before embarking on the adventure. We take stock with you!

Rooftop greenhouses : what are they?

A rooftop greenhouse is a plant production space, professional or not, installed, as its name indicates, on the roof of a building. The added value of this proximity between the building and the greenhouse lies in the energy optimization of these two elements. Indeed, the excess energy production (CO2 and heat) of the building can be reused in circular economy by the greenhouse.
Such installations generally have transversal objectives: economic, social and environmental.

Within the framework of the GROOF project, four partners decided to launch pilot projects and to develop their own rooftop greenhouse according to different typologies and different management models, thus allowing to test the hypotheses and objectives mentioned above:
Since 2018, these four players have taken the steps to implement their rooftop greenhouse project and have, in just over three years, faced many challenges.
The first step, when we are interested in the construction of rooftop greenhouses, is to ask ourselves what challenges we will face, even before starting the construction of the infrastructure. The feedback from the four GROOF partners has allowed us to identify several challenges upstream of construction and to provide some initial ideas for mitigating their impact. These challenges can be listed in three different categories:
Let’s get back to them in details:

Picking up a place

One of the first challenges identified by the GROOF team, and which may seem obvious, is that the installation of a rooftop greenhouse requires that the roof itself meets three minimum criteria :
Finding a roof that meets these criteria is not always easy.

Convincing the owner(s) of the location

Once the ideal location has been defined, the owner(s) of the roof must accept the project. However, during the deployment of the pilot projects, some owners were reluctant and/or refused to host the greenhouse.

Indeed, in addition to the innovative nature of such an installation and the potential constraints related to the infrastructure, the uncertain profitability of a rooftop greenhouse project complicated the discussions and negotiations with the owners of the premises.

Once the difficulties related to the selection of the roof are overcome, the administrative complications arise. In fact, the construction of greenhouses on the roof raises new questions that are generally not yet taken into account by the administrations: is it considered as the addition of a new floor?  What are the urban planning laws of reference in this matter, etc.?
The steps in this field therefore require extensive analysis and require more time.

Once the permits have been obtained and construction can begin, the next step is to hire the trades needed to complete the work.

Since rooftop greenhouse projects are often multi-partner projects, the decision-making process can be lengthy. In addition, when the project owner does not own the building, this further complicates and lengthens the process.

Finally, as explained above, the stages upstream of construction are also impacted by the time required for the administration to analyze the project and to request quotes from potential suppliers.

The preparation phase is therefore long and time consuming. In the case of the GROOF pilot projects, while the partners started their procedures in 2018, it was not until 2021 that the construction of the greenhouses began*.
* It should be noted, however, that delays due to the Covid-19 health crisis have also impacted the duration of the process.

The innovative technologies used in the construction of rooftop greenhouses are expensive. The price of materials can therefore be a barrier to their development. Some pilot projects have had to lower their expectations in order to fit within their budget and be able to realize their project.

Like any entrepreneurial project, it is important to define the right business model to guarantee the economic profitability of the operation. On this business model will depend not only the future profitability, but also the involvement, or not, of potential investors. It is therefore a crucial step.
However, each project leader must imagine his model based on the specificities of his project. There is no universal model that can be applied to any project. Each financial plan must therefore be adapted to the socio-economic issues of the location, as well as to the technical constraints of the building.
For more information on this subject: see the study conducted to identify the causes of the Urban Farmers project in Holland.
READ THE REPORT

Finally, it may happen that the project owner is not intended to be the operator of the installation. In this case, it will be necessary to find an enthusiastic operator who will not be held back by the innovative aspect and uncertain economic profitability of the project.

The operator of such a project must also have technical skills in greenhouse and/or soilless cultivation and be fairly versatile (knowledge of the different crops grown, the different cultivation techniques, possibly having customer contacts, etc.).

Some ideas for reflection

Obviously, although this article aims at presenting you the different challenges you might face in the development of such a project, the four pilot projects conducted by the GROOF team that are discussed in this article are precisely intended to identify these obstacles to facilitate the implementation of these initiatives in the future. Anticipation often makes it possible to take the necessary measures for a project to run smoothly.
In addition, some initial ideas have been identified to overcome some of the challenges encountered : 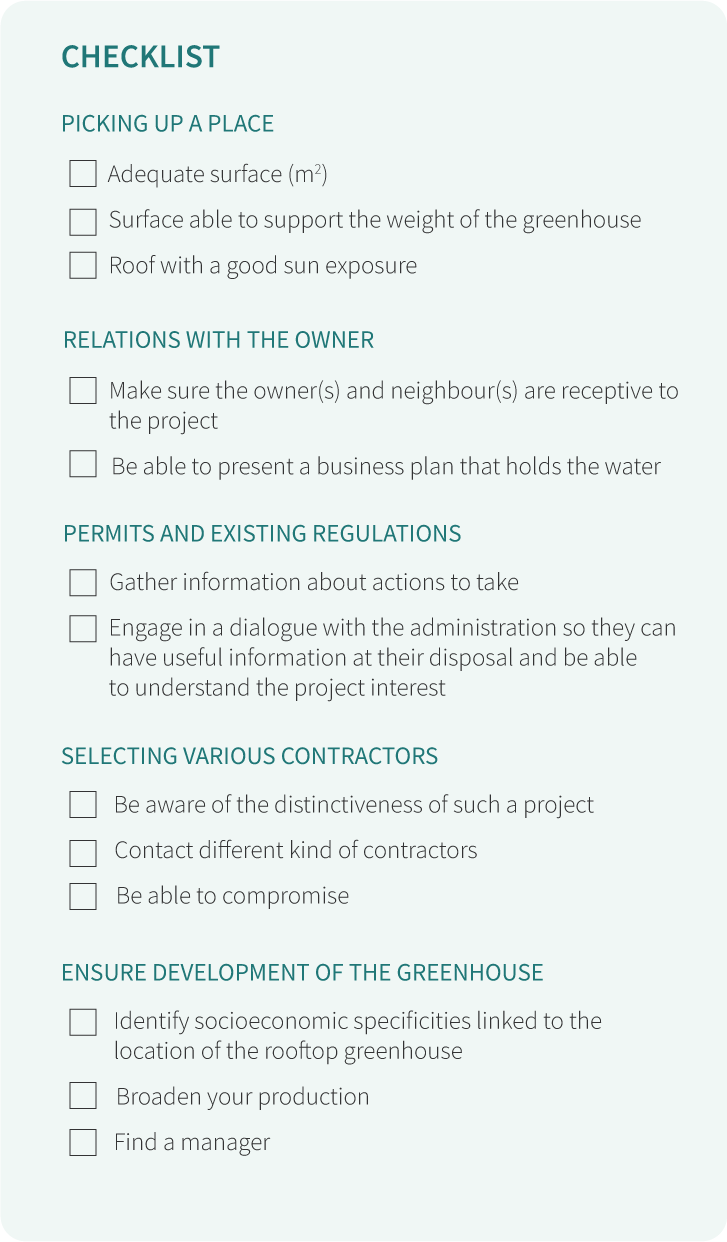 The four pilot projects carried out within the framework of the GROOF consortium have thus made it possible to highlight the challenges that rooftop greenhouses represent, even before their construction.

This is how we became aware that such projects require a deep understanding of the difficulties that their implementation may imply. It will be important to take into consideration not only the administrative and legal aspects, but also the issues related to the location, the construction and the economic model when considering such a solution.

We are talking about a solution here, because in view of the challenges that rooftop greenhouses represent and their long-term profitability, the project must be considered not as an end in itself, but rather as a means to meet specific objectives based on the context of the greenhouse's location.
For more information – Sources et references
The feedbacks that served as a basis for this article are taken from the report "Construction of a rooftop greenhouse - Feedback from the 4 GROOF pilots" that can be consulted and downloaded via this link.  Through this report, the authors wanted to take stock of the existing constraints upstream, during and after a rooftop greenhouse construction project, but also to provide some concrete ideas for dealing with the challenges encountered.