28 criteria to evaluate the maturity of your Smart City approach

While more and more territories are undertaking sustainable and smart transition processes, regardless of their size or type, one question arises: how can one assess the maturity level of such transition? Although the latest Walloon Smart Cities Barometer highlights the progress made in Smart City dynamics in Wallonia, it can be difficult for a territory to properly evaluate itself on this subject if it does not possesses concrete criteria on which to base its assessment. This is why the Smart City Institute (SCI) has developed the Smart City Maturity Model (SCMM). A model that allows territories to evaluate their current Smart City maturity level.

In 2020, the SCI published its first model, the Smart Project Management Model (SPMM). This model enables territories to efficiently structure and manage a project, while integrating the "Smart" aspect into it. The SPMM can therefore be used iteratively throughout the entire life cycle of a project – known as the identification of prerequisites, planning, implementation, and evaluation.

The Smart City Maturity Model (SCMM) takes a more global approach. It is designed to assess the maturity of a territory's sustainable and intelligent transition process. Unlike the SPMM, which focuses on the management of a Smart project from A to Z, the SCMM concentrates on assessing the maturity of the process as a whole. Moreover, it focuses on managerial processes and not on technical aspects.

What is a Smart City maturity model ?

A maturity model provides a series of maturity levels that can be observed during the implementation of a process. In the context of Smart Cities, the maturity model aims to help a territory to assess its degree of progress with regard to its sustainable and smart transition.

Beyond providing indications on the degree of progress in the various processes studied, the model can be used to define priorities based on the elements that emerged from the evaluation. The model also provides a good overview of the territory's strengths and weaknesses.

Thus, the SCMM can define strategic objectives over different timeframes and determine an aspired level of maturity within a specific timeframe based on the newly established priorities.

Finally, the model can be combined with the use of other tools to help territories in their reflections on sustainable and smart transition (practical guides, for example).

Who is this model for ?

The SCMM will support any person willing to undertake or develop a Smart City dynamic on its territory. The term Smart City is used throughout the explanatory note and the matrices. It should therefore be specified that this term is used in a generic way to indicate any sustainable and smart transition approach on a given territory, which includes transition dynamics such as Smart Territory, Smart Region, etc.

Also, although this model is particularly relevant for reflections at the city and municipality level, it has been built so that it can also be adapted to other territorial scales (province, region, state, etc.).

How is the SCMM constructed ?

The maturity model we have developed is based on seven fundamental domains of the Smart City. Each of these domains is subdivided into four components that are assessed through a maturity scale with five levels - level 1 being the lowest and level 5 being the highest. The table below summarizes the model : 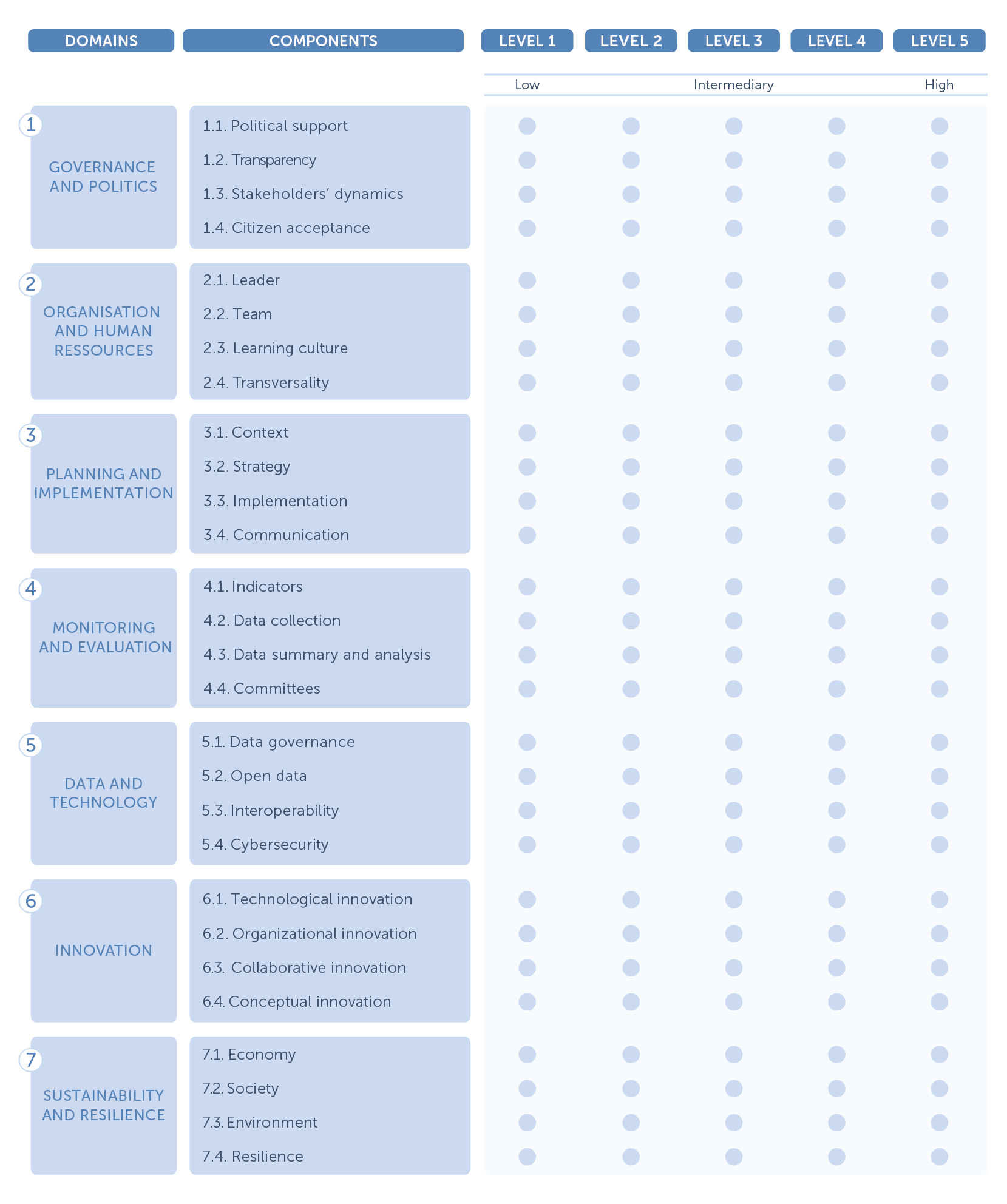 Political support observes how well elected representatives support the Smart City approach. In terms of transparency, it assesses how accurately the public can observe the actions taken by decision-makers. The actors’ dynamics focuses on the partnerships and collaborations between the different stakeholders present on the territory (for example, public-private partnerships). Finally, citizen acceptance identifies the processes put in place to ensure citizen acceptance in the sustainable and smart transition dynamics of the territory.

Initially, the leader component helps identify whether an individual is in charge of the Smart City dynamic for the territory and the demonstrated skills of the latter. The team component helps determine the team's multidisciplinary in order to assess whether that it has all the necessary skills to support the leader's vision and and help in the planning, implementation, and monitoring of the Smart City approach. The learning culture component looks at the expertise of the people involved and the means implemented to increase the team's skills and knowledge. Finally, transversality evaluates whether the territory operates in silos and the type of organizational structure that is established.

The context component assesses the extent to which people involved in the process are "knowledgeable" about their territory. Then, the strategy component looks at whether a strategy has been put in place and how comprehensive and consistent it is with all relevant parties in the area. The third component, dedicated to the implementation of the Smart City dynamic, evaluates if the strategy has been operationalised. The last one focused on communication, which identifies if the information related to the Smart City process has been communicated to all the stakeholders.

In this area, a focus will be placed on indicators in order to determine whether measures have been identified to monitor the Smart City process. Data collection identifies how the data was collected, and thus whether the selected indicators were correctly quantified. The data summary and analysis component evaluates whether the territory is able to understand the causes of a phenomenon, to prescribe decisions based on the studied data and whether a visualization tool is used. Finally, the committees component will question whether strategic and/or operational committees are formed and whether they are involved throughout the entire process.

First, the data governance component identifies the strategy in place to structure the multiple data streams. Then, with open data, as its name indicates, we study to what extent a territory opens its data. The interoperability component, on the other hand, helps evaluate whether the territory is trying to open up the solutions present on its territory. Finally, the model examines the steps taken by the territory to ensure the cybersecurity of its IT systems and networks.

Within the SCMM framework, a solution or process is considered "innovative" when it does not yet exist as is in the territory concerned. Four types of innovation are considered and form the components of this domain. First, we examined technological innovation, which focuses on the creation or use of new technologies in a territory. Then, organizational innovation observes changes in the daily operations of a territory. Collaborative innovation looks at whether open and proactive governance structures have been put in place. As for conceptual innovation, it identifies whether new concepts/ reference frameworks/ paradigms that help reframe societal issues are introduced in the territory's sustainable and smart transition process.

In this area, the three pillars of sustainability - the cornerstone of the Smart City - are studied: (1) the economy identifies the actions put in place to foster prosperity, (2) the society, studies the different elements put in place to promote social well-being and (3) the environment focuses on the actions taken to act on the ecological footprint of the approach. In parallel to these three components, the model also considers resilience, which focuses on the systemic responses to extreme disturbances in a territory.

How to use the model ?

The Smart City Maturity Model is not intended to express a judgement on the state of progress of a territory's sustainable and smart transition process, but rather, in a logic of continuous improvement, to provide food for thought in order to make it evolve.

Moreover, the seven domains and the order in which they are presented do not imply their respective importance, given that each territory has its own specificities, the priorities are therefore likely to vary from one approach to another. In the same vein, having a high maturity level for all the components should not be an objective, since the point is to underline the evolutionary potential of the Smart City process based on the territory's features.

From a very practical point of view, the SCMM is made up of two documents:

In conclusion, the SCMM is a model that can be used by any territory wishing to evaluate the progress of its Smart City approach in order to study the potential evolution of the transition undertaken.

Each territory will be able to use this model depending on its specificities by setting its priorities among the seven domains, by choosing the order in which it wishes to analyze them, and by keeping in mind that the objective is not necessarily to reach the maximum level for each component.

Finally, a careful reading of the explanatory note accompanying the model will allow the user to identify all the nuances and particularities of the model in order to better determine the levels that are most representative of the transition approach that is underway in the territory studied.

More information about the publications of the Smart City Institute