Smart City: Citizen happiness at the heart of the debate

Smart Inspiration Day 2019 - What to learn from this new inspiring day? On 16 May 2019 in Liège, nearly 130 people gathered for the second edition of our Smart Inspiration Day, dedicated to well-being in cities. Our team proposes you to retrace the essential questions that punctuated this day of inspiration.

> Read also: "What to learn from the workshops? "

Measuring and contributing to citizens' happiness

One of the big questions that most of our cities and municipalities are working on is without doubt: What can we do to maintain and improve the quality of life of our citizens on a daily basis? What if the answer lies in the happiness felt by our citizens? This is obvious, you may say, but the question becomes more complicated when we look at the indicators that determine this much talked about happiness. What are the factors that really influence the happiness of the inhabitants in the long term?

As Laurence Vanhée (Chief Happiness Officer and founder of Happyformance) pointed out at the opening of Smart Inspiration Day 2019, the world has focused over the last 30-40 years on optimising production systems and performance, to the detriment of the human factor. Increasing production and wealth were seen as key indicators of the success of our companies and policies. But is happiness only about the production of wealth and the economic development of our countries and cities? Not so sure.

Anne Henderson (Senior Analyst at the Happiness Research Institute in Copenhagen), in her lecture "How to happy-cities", chose to illustrate this point with a particularly striking example: the city of Seoul. Since the 1960s, the city has undergone rapid economic development, while the well-being of its citizens has steadily declined: today, South Korea is among the top three countries with the highest suicide rate. Conclusion: wealth and happiness do not necessarily go hand in hand.

At the same time, as early as 1972, the King of Bhutan chose to measure the success of his country not only on the basis of its GDP, but also with an innovative index for the time, intended to measure "how its inhabitants feel". It was one of the first countries to do this, and to focus on how people feel.

Since then, happiness measurement systems have continued to grow, a sign that the happiness factor is now a recognised and fundamental tool for measuring the quality of life in our cities. Albert Schweitzer said: "Happiness is the only wealth that is duplicated if it is shared". This clearly shows the potential of happiness for our cities and towns.

The recipe for happiness

So what are the factors that influence our happiness? Laurence Vanhée, during her conference on the issue of happiness at work, pointed out 9 essential factors for feeling fulfilled in one's professional life :
But if you think about it, couldn't this recipe be applied more broadly to any form of community, and therefore to our cities and towns ? Doesn't a city that is a good place to live seek to foster links between its citizens, to involve them more in co-creating services that best meet their needs and values?

A smart city is also a happy city

Although the study of happiness is not an exact science, some people nevertheless study it, using a whole series of indicators. This is the case of the Happiness Research Institute in Copenhagen, of which Anne Henderson is a member. Among the major questions raised during her speech: How can we measure the happiness of citizens?
At the city level, measuring their happiness would mean studying the degree of satisfaction they get from their lives as a whole, focusing on certain key factors, which are of course influenced by the environment in which they live. These include life expectancy, freedom to make their own choices, social contacts, mental health, trust in their fellow citizens and government, sense of security, generosity (of money or time), but also GDP.
Furthermore, looking at the 6 dimensions of the Smart City (Smart Mobility, Smart Economy, Smart Environment, Smart Living, Smart People, Smart Governance), and the level of satisfaction they give to the citizen is also a particularly revealing answer: do the projects and services developed by my city/municipality contribute to the well-being of its inhabitants?
As you will have understood, measuring the happiness of its citizens means not only considering each of the determining dimensions of our cities today and the degree of satisfaction they provide, but also taking into account the inherent factors of people, which are influenced by the environment in which they live. As Anne Henderson says: "A smart city is also a happy city. "

What about Copenhagen and Vienna?

Both cities are recognised as world leaders in quality of life and have been focusing on the happiness and well-being of their citizens for many years through the construction of their strategies.
Denmark, for example, is in the top 3 happiest countries (Belgium in 18th position). The main factor influencing this ranking? In the Nordic countries, the notion of trust plays a major role in the happiness of their inhabitants and is an integral part of their culture. "Sitting at a café, would you leave your baby unattended in its cot while you went to the counter to pay your bill? In our country, this may seem unthinkable, but for the Danes it's completely normal: they trust each other," explains Anne Henderson.
Its capital, Copenhagen, is recognised in Europe as "the most liveable city". Indeed, the city relies heavily on its health system, its infrastructure, its transport system and its "bicycle culture". In Copenhagen, there are five times more bicycles than cars. In fact, 63% of the members of the Danish Parliament cycle to work. Simple arrangements such as public bins leaning over the cycle paths, which allow cyclists to throw away their rubbish without having to stop, or ramps so that they don't have to put their foot on the ground when they have to stop, contribute to making cyclists happier on a daily basis!
Closer to our country, the city of Vienna has nothing to envy to the Danish capital, as in 2019 it was elected for the 10th time as the most pleasant city in the world to live in. Nikolaus Summer (Senior Expert for the city's Smart City Agency) confirmed this during his speech with this particularly telling figure: 96% of its residents say they like living in Vienna! But what are the strengths of this city? The influx of young citizens despite a growing ageing population (dynamism), a very low crime rate, or its social inclusion policy: 60% of Viennese are eligible for social housing. This type of housing is highly developed and therefore very common in the city, so much so that it can be found in all neighbourhoods, even the richest ones, which favours a real social mix. Furthermore, Vienna is a city of short distances, favouring public transport in particular - 73% of urban mobility is considered to be green. Finally, almost half of the city is made up of green spaces. The city of Vienna's 2050 objective is to offer the highest possible quality of life, while preserving resources and leaving room for innovation.

And what about technology?

With digital technology playing an increasingly important role in our lives, it is clear that it can contribute to a better quality of life in our cities - provided that it meets a clearly identified need or problem. For example, in Quito (Ecuador), the use of smartphones has made it possible to improve safety on public transport. Another interesting example is Goodcitylife. This application makes it possible, for example, to find a journey that is not only as fast as possible, but also as pleasant as possible. How does it do this? It suggests a diversion of a few minutes on the route, thus providing the user with a totally different experience: more pleasant, flowery and green paths, passage through pleasant, less noisy neighbourhoods, etc. A way of arriving at work in a good mood in the morning, without losing too much efficiency. Emotional gain (and not time) would therefore be the real key to happiness. 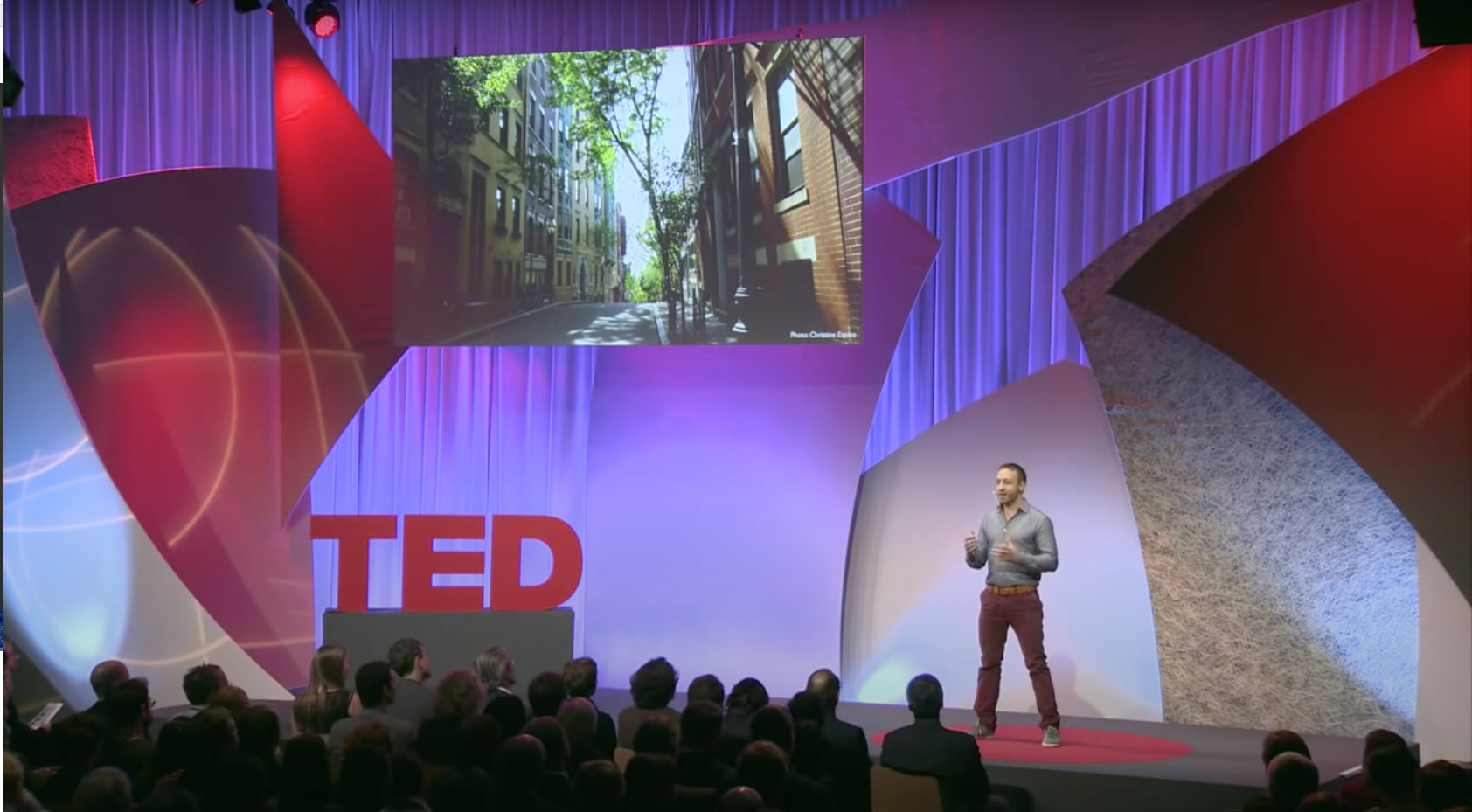 To go further:
Smart Inspiration Day, what to learn from this inspiring day : Article #2 (workshops)
Method - Feel Good Toolkit :How to concretely measure the well-being of your citizens?
Photo credit : Nathan Dumlao - Unsplash